In solidarity against antiziganism

This green rectangle represents the green card that was not drawn. With this green card, a few white celebrities, who were strangely invited as racism experts, could have briefly and succinctly expressed their support for no longer using a racist foreign term for Sinti*zze and Rom*nja in a stupid vote. Instead, they voted unitedly in red against it. After being upset for 20 minutes that everything would be put on the gold scale. After they said one racist word after another, wanted to keep it in books and streets, with one harebrained defense argument after another.
After the Central Council of Sinti and Roma was laughed at, called “2,3 people who have nothing to do” and its statement as “nonsense”.
Introduced by a clip that already anticipated most of the racist arguments and the result of this vote.

This is what happened in a program of WDR which sees itself as “the final authority” (#dieletzteInstanz).

This has all been broadcast twice and only then came to public attention thanks to the criticism of many PoC like Malcolm Ụzọma Ohanwe, Aminata Touré, Duzen Tekkal, Gianni Jovanovic and many others.

After the rebroadcast of this show on Jan 29th, two days after the day of remembrance for the victims of Porajmos.

In response, Sinti & Roma Pride convened “the very last authority” (#dieallerletzteInstanz). People who are affected listened to that part of the show and deconstruct piece by piece the racist Happyland. Listen to it if you (like us) still need education on antiziganism, racism, entitlement, silencing, etc.

We also found the reaction of Enissa Amani very strong, who rented a hall for the one and a half hour talk show “Die beste Instanz” and invited five guests who are directly affected by racism and who excellently know the topic.

More solidarity instead of conspiracy theoriescommunity-support 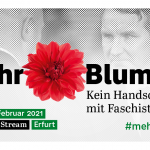