Rafael moved to Suhl last summer and was immediately asked by the International Bund to create an exhibition.

He spoke with migrants and people of color about their experiences with racism and similar forms of discrimination in Suhl. The focus was on what this does to their feelings about life here and in what form they would like to see solidarity. We also talked about their wishes for their lives and for living together in the local community. All the interview transcripts could be read in brochures at the exhibition in Suhl’s main church.
Large portraits of the interviewees are also shown on posters. They were mostly created shortly after the intensive, long conversations and are meant to make the moment of the encounter a bit more comprehensible and to create a direct access.
Just now 4 more interviews and portraits were added, because especially the perspective of racialized people who grew up in Suhl was missing, as well as experiences from the camp on the Suhl Friedberg, the Thuringian initial reception facility. If you are also affected by racism, live or have lived in Suhl and want to be part of the project, feel free to get in touch.
Most of the texts and pictures can now be read (in German) and seen on the project website. For the future it is planned to do educational work with the project in schools. 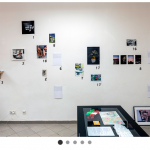 Some perspectives on the impacts of covid-19community-support, release 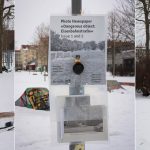